In the metropolis of the island, nothing can be felt of the big town chaos and hectic. Even so, this port on the east coast lures visitors with it’s cultural sights, businesses and the largest ferry and yacht harbour on the island.

Bright yachts and colourful boats bob in the harbour of San Sebastian, next to the large jetty built to accommodate the ferries arriving from Tenerife. 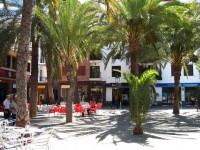 It is worth staying in the port and savouring the atmosphere before moving on to your destination.

The Lively Squares of San Sebastian

Gomeras meet up in the few town squares to catch up on news, chat, or just to watch the children play.

A small promenade leads directly from the harbour to the Plaza de Las Americas.

Many kiosks and bars line this popular meeting place by the seal The town hall, complete with open arcade, a small church clock and wooden balconies, stands on the eastern side of the square.

Directly adjoining it is the Plaza de la Constitution, with lovely Terrace cafes.

This spot under the Indian laurels is perfect for relaxing and watching the world go by.

Twice a week, locals sell their homemade jams, fresh fruit and veg and other snacks. 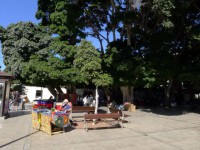 On this central square stands one of the oldest buildings in town.

The former customs house was built in the 17th century and can be recognised by the wooden emblem of the island.

Goods to be exported were kept here, it became famous for another reason however.

It’s courtyard has a well, from which Columbus filled up his water reserves in 1492, before heading off over the Atlantic.

A few metres away from the centre of town, the capital has two beautiful beaches, Playa de San Sebastian and Playa de la Cueva.

The capital has no trace of hectic and big city chaos. San Sebastian de La Gomera has a provincial flair and offers an attractive location thanks to a good infrastructure and wonderful accommodation.

More images can be found in our gallery of San Sebastian.

Tips for your Holiday

La Gomera at a glance: