The green Hermigua is situated romantically between two high mountain ranges. The beautiful, wide valley in the north of La Gomera is well known for its temperate climate. Especially hikers are attracted to the unique nature of the place. 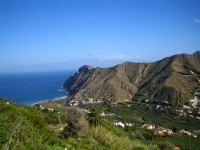 Water-filled ravines provide year-round moisture to Hermigua and give the region one of the largest banana harvests of the island.

The small river Rio del Cedro cascades impressively from a 100 metre waterfall into the valley.

The Twin Rocks of Hermigua

One of the landmarks of Hermigua is the twin rocks Roques de San Pedro. Two volcanic vents, shooting up from below the ground mark the community Monteforte. There used to be a sugar mill situated here.

The once profitable export of the Conquistadors has long since lost its importance for the Canary Islands and has been replaced by bananas.

Anyone who walks down the street to the Playa de Hermigua, passes on the right the former Dominican monastery El Convento de Santo Domingo. 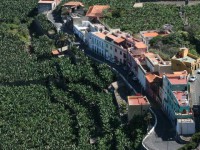 Tuscan pillars, gothic archways and mudejar ceilings are proof of the monastery’s development over hundreds of years.

The arts and crafts museum Los Talearres can be found on the Main street. Tools of years gone by, such as looms, pottery and millwheels, can be seen here. Enthusiasts of typical Gomerean creations and musical instruments are bound to find something appealing in the little stores dotted throughout the town. 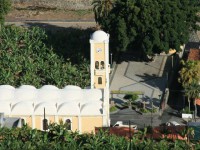 In the deep part of the valley of Hermigua, stands the parish church Nuestra Senora de la Encarnacion, which was built in the 1920s. Surprisingly close to the capital city, the plain church stands with its high tower.

The small churchyard, with its Indian laurels, invites you to relax. In an adjoining mansions, the cultural centre of the town can be found.

The four concrete pillars of a former loading station are a unique attraction on the beach of Hermigua. Because of the frequent high waves, ships couldn’t dock at the jetty, instead, they had to be unloaded by crane. 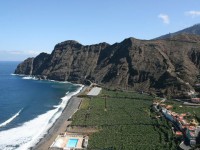 In Hermigua the word playa, for beach, means a flat access point to the sea. Because of strong surf in the coastal area, the beach is not particularly good for swimming.

Anyone wanting to swim should go to the nearby Playa de la Caleta.

Be careful when swimming in the Pescante sea pool and at the Playa de Hermigua!

Observe the water carefully before getting in. Not all waves are the same size. Ask locals and other guests about waves and currents.

The nicest beach on the north shore of La Gomera lies in a wind-protected bay, a few kilometres east of Hermigua. Picnic areas pay tribute to the long days spent at the beach.

A small bar is open in the summer months and offers fresh fish. The screed and strong current in this area of water should still be treated with caution however.

Beautiful accommodation in the north of La Gomera can be found in the fertile green Hermigua. It lies romantically between two mountain ranges. Hikers will feel especially connected to this place.

Beautiful apartments and studios in Hermigua.

More images can be found in our gallery of Hermigua.

Hotel Jardin Tecina
Top hotel in a fantastic location above the sea.

Tips for your Holiday

La Gomera at a glance: